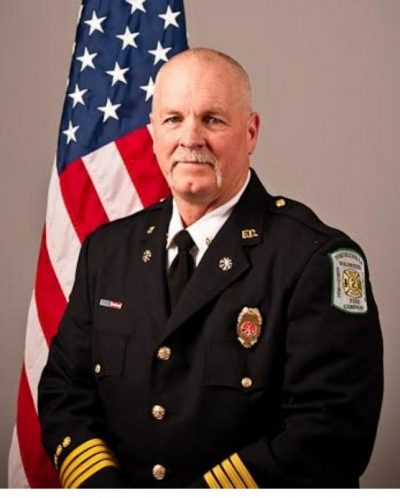 Buddy was born August 25, 1954 in Leesburg, VA to Aerts and Anne Colby. He graduated Loudoun Valley High
School in 1973. He immediately began his employment with VEPCo, (Dominion Energy), as a ground man and advanced
to the level of Operations Supervisor. He was slated for full retirement in December of this year.

Buddy began his extensive time in the volunteer fire service in 1972 by joining the Leesburg Volunteer Fire Co. and
transferred to the Purcellville Volunteer Fire Co. in 1974. He held every operational office in the company over the
years. Many of them he held multiple times, holding the position of Asst. Chief at the time of his passing. Along
with his brothers Allen and David, Buddy was drawn to the the fire service by the distinguished service of their
father as being the Volunteer Fire Chief of the Round Hill Vol. Fire Co. Buddyʼs son Trevor continued the tradition
by beginning his fire service career with Purcellville and is now a career firefighter with Loudoun County Fire and
Rescue. Buddy was greatly respected for his technical knowledge of equipment maintenance/operation and
apparatus specification. He served as both a leader and a mentor to generations of firefighters. Buddyʼs
dedication to the fire service has been recognized by his induction into the Loudoun County Fire & Rescue Hall of
Fame, The John C. Carr Memorial Award (2019), and the Virginia Sons of the American Revolution Fire Safety
Commendation (2013).

Buddyʼs life long love of motorcycles culminated with being a charter member of the Red Knights, Virginia Chapter
12, Motorcycle Club in 2008. He was a loyal and dedicated member of the club and was serving as Ride Captain
at the time of his passing. He throughly enjoyed the fellowship of riding with the group. He also cherished every
opportunity to ride with his wife Janet and son Trevor.

In lieu of flowers donations can be made to:
The Colby Family Fund
c/o Michael OʼBrien
P.O. Box 2636
Purcellville, Virginia 20134